This follows the demise of the second president of the republic of Kenya, Mzee Daniel Toroitich Arap Moi in Nairobi Hospital.

President Uhuru Kenyatta had earlier pointed out that Mzee Moi will be accorded state burial and other instructions till he is laid to rest.

Head of public service Joseph Kinyua on Tuesday made the announcement which was received well by Kenyans who want to still mourn Nyayo.

Moi died in 4th of February 2020 having battled illness and was in and out of hospital till January this year when he was placed on life support machine.

Last year, according to the formal age known by Kenyans, Moi turned 95, age known to many as the dead-end for politicians.

Press secretary confirmed that Mzee Moi hit a century and having served Moi for over 40 years claims that the retired president died aged between 102 and 103 years.

He claims to have known Kenya’s second president more than anyone else, saying that his job entailed knowing his boss inside out.

Lee Njiru also added that Moi asked him not to refer to his identity card as it is misleading.

“I will confirm this to you, Mzee had told me not to look at his ID card, I want to correct you, Moi was between 102 and 103-years-old not 95-years-old like everyone is saying,” Njiru said.

President Uhuru Kenyatta promised a state burial for the professor of politics and a dictator.

President Uhuru Kenyatta has given instructions to be observed before and during the burial of the late Mzee Moi.

Second president Daniel Arap Moi died in 4th February 2019, aged 95 after battling illness for a while.

Announcing his death officially, Kenyatta said that the country will give Moi his last respect.

Here are other instructions Uhuru want Kenyans to observe during the mourning period;

1.The nation will observe a period of national mourning from today until the day of his funeral.

2. Kenyan flag shall be flown at half-mast at State House, State Lodges, all Public Buildings and Public Grounds, all Military Bases, Posts and Stations, all Naval Vessels of the Republic of Kenya, and however elsewhere throughout the Republic of Kenya; from dawn on 4th February, 2020 Until his burial.

3. The late Moi will get state funeral including the firing of 27 gun salute. 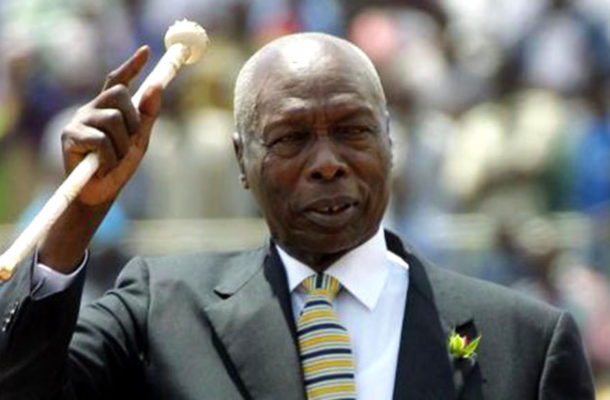 The retired president of the Republic of Kenya has been battling illness and was in and out of doctor’s watch since the year started.

His demise comes one day after the family gave an update on his health and maintained that Mzee was conscious and nothing to worry about.

He will be remembered as the longest-serving president of Kenya after ruling for 24 solid years with an iron fist, under the single-party system.

Moi, who is also known as a professor of politics, turned 95 years in September 2nd, 2019, the same age of his peers, the likes of Robert Mugabe, and Nelson Mandela.

He had 8 children and his son, Gideon Moi, is a powerful senator and Kalenjin’s kingpin after deputy president William Samoei Arap Ruto.

The students trampled to death ona a stampede while leaving school for home.

Report reaching us is that the students were avoiding a teacher who was cannning them when they fell from a storey class building.

Sarah Cohen Thursday afternoon visited the grave of her late husband to lay a tombstone.

Tob Cohen was brutally murdered last year and his wife, Sarah Cohen was the main suspect at the event of Investigation.

After seeking the court to be allowed to her home to get clothes and expensive wine, Sarah decided to visit the husband according to traditions of Jews.

“I have today laid a tombstone at the grave of my late husband, Tob Chichou Cohen. At a suitable time, I will hold a private ceremony to commemorate the laying of the tombstone as appropriate,” she stated.

Judge Mutuku ruled that the prosecution failed to prove that Sarah Cohen was a flight risk.

Kenya Airways Suspends Flights To and From China Over Deadly Coronavirus

Kenya Airways has finally suspended flight to and from Guangzhou, China following the coronavirus outbreak.

Kenyans on social media had lamented to KQ to stop flights from China after a student was suspected to have the virus after landing at Jomo Kenyatta International Airport (JKIA).

“We have temporarily suspended all flights to and from Guangzhou starting Friday 31 January 2020, until further notice,” said Kenya Airways.

The airline also maintained that the flights from Nairobi Kenya to Bangkok will still operate as they take high precaution.

A sigh of relief also after the tests results from student who was suspected to have the virus came in as negative after Kenya sought validation in South Africa.

Other countries including France and Germany were the first to suspend flights to Coronavirus hit zone in China.

Kenya is reported to have Africa’s sixth-highest risk of receiving a case of the new coronavirus imported from China, according to a new modelling study produced by Northeastern University in the US.

Two people were on Monday charged in a Mombasa court with stealing a pistol at Deputy President William Ruto’s official residence in Mombasa, The Star reports.

Elsia Kazungu and Joshua Owiti are accused of stealing a Ceska pistol loaded with 15 bullets on December 19 last year.

Francis Kariuki, an officer attached to DP Ruto’s residence in Mombasa recalled meeting a lady by the name Stella.

Stella was reportedly a commercial sex worker and was approached by Kariuki to offer services for some pay.

They boarded a tuk tuk to the officer’s quarters at the DP’s residence and on arrival, he introduced himself to the GSU officer manning the gate before he was allowed in with the woman.

Once inside, she requested Kariuki to allow her to take a shower.

He took his pistol and placed it under a pillow.

The woman came back and sealed the deal as agreed.

According to the police report, when the officer woke up after some hours, he realised his pistol, mobile phone and Sh700 were missing

Kariuki was advised to print his M-Pesa statement and he realised a transaction he did not authorise was made to one Jackson Muthangya.

Upon his arrest, Muthangya said he was a boda boda operator.

The operator said he didn’t know Stella and only picked her in town and ferried her to Nyali.

Investigations further revealed that Stella’s real name was Gladys Wanjala and she allegedly sold the gun to Elsia, who is facing the criminal charges.

The suspects denied the charges before Mombasa chief magistrate Edina Nyaloti and were released on Sh200,000 bond.

Nyaloti, however, questioned prosecution on how the accused accessed the DP’s residence, which is heavily guarded.

The case will be mentioned on February 10.

In the ruling on Monday evening, the court said the money will be used to settle the hospital bill of victim Felix Odhiambo Orinda aka DJ Evolve.

Babu was arrested a couple of weeks after shooting the DJ on the neck at 7:00 AM in B-Club, Nairobi.

Baby’s actions were highly criticized by Kenyans and a section of his colleagues from ODM distanced themselves from him.

Babu was Monday Evening released on bail of Ksh 10 million to be paid in installments of 4 and to be directed to Evolve’s medical bill.

However, Babu was met with tough conditions that he needs to uphold;

Police have issued a statement after the arrest of activist Mildred Atieno over inciting the public.

Atieno who is an admin of Facebook group Buyer Beware was on Saturday arrested at her home in Donholm by police from the DCI.

Through a video that she posted on social media, Atieno explained said that over 10 officers jumped over her gate and lobbed tear-gas canisters into her gated home.

They have tear-gassed everywhere, I don’t know why they have come to arrest me, I will not open the door… They have even killed my dogs,” She said.

Kenyans on Twitter condemn the act of the police that saw the activist lose a dog.

In a statement, the police boss explained why they acted the way they did during the arrest.

” Honestly, what would you do if you are a law enforcement officer, and a suspect refuses to let you arrest her over alleged crime? The officers assigned to arrest her followed the lawful procedure – one: identify yourself, two: reveal why you are at the suspect’s premises, three: ask him or her to surrender, four: should he or she refuse, then use any means possible to effect the arrest. That is what we did, and use of teargas to smoke out an uncooperative suspect is not illegal in any way.

“The said-offence is not the only wrong-doing we have arrested Owiso for. She has several other cases in different police stations that we are following up on,” the statement read.

Atieno and her husband John Odhiambo, was released Saturday evening after paying a bond of Ksh 15,000.