Nyege Nyege Festival went down over the weekend and revelers from across African nations and even the world flocked the place raising the flags of their countries higher.

the word Nyege Nyege came about after Nyege hit by Diamond Platinumz last year which was banned by the Tanzanian government.

Notable people attended the event and Boniface Mwangi could not hesitate to show his raunchy side by sharing steamy photos with his better-half.

One of the Major acts that #NyegeNyege2019 was @ROPHNAN2 an Ethiopian DJ, record producer and songwriter.

His @boilerroomtv set at the Eternal Stage & Live band performance at Main Stage were the highlight of Sunday night.

Check out the vibe.
A THREAD. pic.twitter.com/EZkQeF2wsO

Taking to his Instagram, Boniface Mwangi showered the love of his life with kisses.

Here are some of the photos from the event; 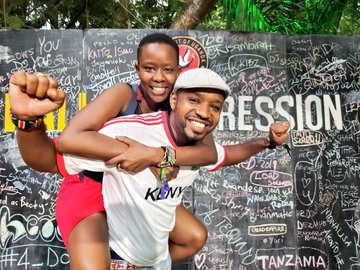