Day 13 and government spokesperson Cryus Oguna has started smiling to the cameras as the wreckage is pulled out of the 60M deep Indian Ocean.

The despair that engulfed the air in the coastal region over delayed retrieval of the bodies of the victims, mother and daughter, might soon turn bright after reports from divers.

Mr Oguna had earlier issued a statement on what was taking the bullish Kenya Navy to get hold of the car that sunk deep in the dangerous Ocean.

Cyrus Oguna in a briefing

“We have delayed because there were strong currents. More importantly, there are two bodies which must be given respect. Had it been just the vehicle, we’d have retrieved it a long time ago,” said Oguna.

The car, Toyota Isis, has already been hooked and is being pulled out at the time of writing this publication.

Kenyans in the coast could not hide their joy and were seen flocking the outskirts of the area where they could get good visibility at a safe distance as they witness the end of a 13-day nightmare. 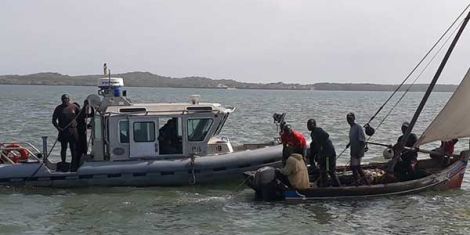 Officials of the Kenya Maritime Authority and fishermen during a past rescue operation. Two brothers lost their lives after their boat capsized Photo: Daily Nation

South African divers led the operation alongside Kenya navy and it is a matter of time and the family will get to rest after the emotional incident.

More updates will come when the car hit the surface of the water…..