At last, we heard it, the informer’s confession that lawyers for the alleged killers tried and tried to suppress. The informer even recanted.

Human rights lawyer Willie Kimani was stuffed into the boot of a car alongside his client and taxi driver for more than three hours as his alleged killers debated whether to kill them. All were handcuffed from behind.

The three, who were brutally murdered three years ago, could have been listening to them argue the merits of murder on June 23, 2016.

Kimani, Josphat Mwenda and Joseph Muiruri had been driven inside the boot of Senior Sergeant Fredrick Leliman’s car to a nearby bush where they were to be executed.

Chief Inspector Geoffrey Kinyua on Monday read out the confession recorded by police informer Peter Ngugi to an emotional, packed courtroom. He narrated in excruciating detail how the three were killed.

This is what he said:

In the confession two names are prominent, Leliman and Mwangi. Another name frequently mentioned was that of another officer named Kamenju, who is still at large.

Ngugi said that they had arrested the three victims earlier in the day after he trailed Mwenda to court and later, alongside Leliman and Leonard Mwangi, they jointly arrested them and took them to Syokimau AP Post.

However, later at 7 pm when they learnt that Kimani had contacted his wife, they decided to go to the AP post and that’s why they took them from the post to the bush.

Still in the boot, they were followed in another car by Kamenju.

They drove from the AP post across to the Mombasa-Nairobi highway and entered a busy area just a few metres from the highway near a bush. Kamenju joined them a few minutes later.

“We started disagreeing on how to execute the victims, myself and Sgt Mwangi were of the view that we had already exposed ourselves the moment the victims were placed in custody and we thought the best thing was to release them,” Ngugi said.

However, Leliman and Kamenju insisted that they must be killed and they debated for more than three hours. 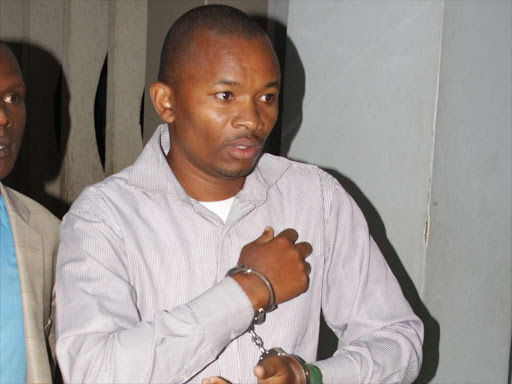 Civilian Peter Ngugi who is charged alongside the police officers at a Milimani court on February 20 for the hearing of the case. PHOTO:COURTESY

At about 9 pm a police officer at the weighbridge joined several civilians and said the public wondered what they were doing there. Kamenju said they were officers on duty.

“At around 10 pm Mwenda who was the main target was killed. He was strangled to death using a rope and a nylon paper. He was removed from the boot of Leliman’s car and placed on the ground and his body was put in a sack and put in Kamenju’s boot,” confession reads.

Immediately after Mwenda was put in the boot, the same police officer who inquired what they were doing passed on his way home and waved at them.

At 11 pm, the second victim was picked from the boot and taken to a different corner, not where Mwenda was killed and was also strangled and he was put into two sacks because he was tall, the sack was put over the head and the other from the legs and joined at the hip by a rope.

The last victim — Willie Kimani — was killed almost immediately after the second victim was placed in the boot alongside Mwenda while the other victim was put in Kamenju’s car.

They were all killed using a rope and nylon paper. Ngugi says his job was to guard them before handing them over to Mwangi who took them to the killing area. Leliman and Kamenju were waiting there and after the killing they ut them in sacks in the boot.

After all three were killed, Ngugi drove Leliman’s car that had two bodies while Kamenju drove the other one.

Kamenju led the way as said he knew Dunyu Sabuk area where the three were to be killed because he worked there and would help dispose of the bodies.

They took a rough road and got to a bridge where they stopped, removed the bodies and threw them separately into the river.

After disposing of of the bodies they drove back way to Mlolongo at 4 am and ate at an Asian restaurant.

On Monday Justice Jessie Lessit was also told of a chronology of events carefully crafted several days leading to the murder.

In the said confession that Ngugi has disowned, he says in 2011 he was approached by a Kabete OSC named Lelei who later recruited him as an informer.

In 2016, he met Leliman through Lelei when he visited him after he was transferred from Busia to Mlolongo.

“I kept visiting the OCS  and that’s when I got to know senior Sergeant Leliman who was a SPiv team member,” the confession reads.

In early May of 2016 while he was at Mlolongo police canteen, Leliman sked for assistance.

“He told me that there was an issue bothering him, saying he encountered a situation that forced him to shoot at thugs on a motorbike, injuring one person, and the victim wanted him sacked and jailed,” Ngugi told the police.

Leliman told him Mwenda was pushing for his dismissal and that he was being assisted by Ipoa for a hearing on June 23.

Kimani was representing him.

“The case was set for hearing on June 23, 2016, therefore we must act the next day when he comes to court,” Leliman was quoted as saying.

He wanted Ngugi to follow Mwenda after court and inform a lady who would show him the target.

He was given a different mobile phone.

On the day of the case, he left his house at 5.30 am and got to Mlolongo at 7.30 am, meeting   Leliman driving a while Nissan Wingroad with a woman in the back eat. 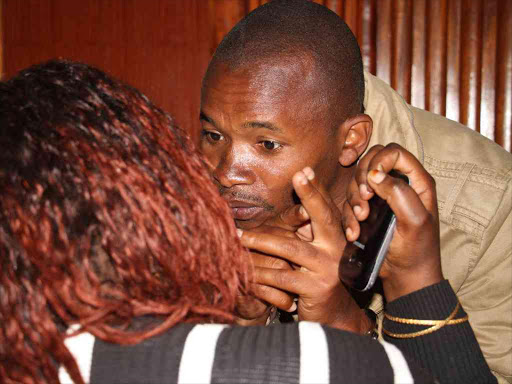 Leliman said she would identify the “wanted man”. He did not give her name

They took a matatu to Mavoko law courts and Nngugi was given Sh2,000to share with the lady; previously he got anotherSh2,000 for fare.

He arrived at 9am and the woman showed him the target at a distance of about five metres.

He says he identified him quickly, Leliman describe him at “Kamutu nyama ndogo.”

“I remained until 11am when  Mwenda came out and I realised he was with another man,” the court heard.

He told Leiman about the other person and the cop told him the other man was a thief — Willie Kimani.

The two went straight to their car that had a driver while Ngugi lwent to Leliman’s car outside the court and found a Sergent Mwangi. H was toldMwangi was part of the operation.

The vehicle carrying the targets drove pas them, then followed and caught u at a railway crossing.

“Just when we were about to overtake them, Menagi drew his pocket phone and told them to stop. They stopped and immediately myself and Sgt Menagi told them we were officers and they were under arrest,”

They complied and were put into Leliman’s car and Ngugi took possession of their car and drove it to dispose of it.

Ngugi said he realised that the route was dangerous because anybody could have noticed the car was not being driven by the owner. It didn’t have enough fuel and refuelling was dangerous.

He drove to Limuru and abandoned the vehicle at Kwambira at 3pm.

“The other thing disturbing my mind was the phones left in the car by the victims  were ringing all the time, I switched off four of the five phones and I was unable to switch off one of them. After parking I threw them away,” the confession reads.

He went back to Mlolongo and was told the three had been locked up at Syokimau AP post.

The court was told that after the bodies had been dumped, they went to a pub for food and drinks.

Leliman left at 4.30am followed by Mwangi and at around 6am Kamenju  left the bar and he (Ngugi) was the only one ledt in the pub.

“I had taken a lot of beer and blacked ut. I stayed in the bar till 4am when I went home,”Ngugi said.

Ngugi said he didn’t respond because he knew what had happened that night.