Hawaii Through The Eyes Of Travelpreneur Michael Peres

It’s not always easy to ditch the 9 to 5 and become a full-time digital nomad. Many of us harbor secret fantasies of finally escaping the rat race, but few of us have the drive and courage required to take that first step.

Not Michael Peres, however. The Montreal native has spent the last three years on the road and now makes it a business priority to mix his hard-won wisdom with a creative flair all of us own—a heady concoction whose presence can be felt in every venture the young magnate embarks upon.

The lifestyle has its own perks and pitfalls, but one of the undoubted benefits is the endless stream of exceptional people you’re likely to meet on the road. In business, networking is everything, which is why Michael’s insights are so potentially valuable. We caught up with Peres during a lull in his busy work-day; but despite his packed schedule, he was confident, calm, and happy to share just what makes Hawaii so special to him.

Q: Thanks for giving us some of your time, Mr. Peres. Let’s get straight to it. What makes Hawaii stand out from all of the other places you’ve been?

Michael Peres: It’s a funny thing. More often than not, the only time I heard people refer to Hawaii was as a kind of a getaway—a place they could go to escape work or the tedium of daily corporate life. I found it to be exactly the opposite. For me, Hawaii represents opportunity.

It’s beautiful, sure, but there’s a lot more to it than that. The key thing you need to understand about Hawaii is how densely packed it is with valuable connections. Some of the business world’s most influential people vacation there, and if you’ve got your networking game on point, you’ll be able to make some long-term connections which are going to be really valuable further down the line. Not just business connections, either—I’ve made personal friends whom I’m delighted to consider my mentors. They’ve been guiding me here and there as I get my own enterprises up and running, and it’s been a super valuable asset to have.

Q: What’s the day-to-day life like? For example, how do you handle accommodation?

MP: Between us, hostels have never really been my thing. Like a lot of people, I value my privacy, and that’s just not an option with most hostels. I have to say, though, I turned out to be completely wrong on that front.

There’s no better place to meet people. It far outweighs any lack of privacy—the sheer volume of interesting people you come across makes staying at one well worth it. I’ve actually come up with a pretty good way of mitigating the downsides while boosting the positive impacts on my personal and business lives. What I do is I rent an AirBnb down the road, but during the day I hang out at various hostels. This has tried out to be the perfect blend, for me at least. I’ve got this steady stream of new connections which is invaluable for anybody looking to make a go of things as a digital nomad. I do have to say, though, that there’s a bittersweet nature to the way connections are made here. People typically only come for a few days at a time, so you have to contend with a stream of new faces. While this is great for expanding your network, it can really hit you sometimes—especially when you’ve made unique bonds with people, only to tell them goodbye.

It goes way beyond just meeting potential clients and collaborators, though. My friends I’ve met like this have been people I’ve rented a car with, traveled around the island with. We’d hang out, talk late into the night over a few beers, we’d share fears, worries, dreams. Lifelong friends, really, is the best way to describe the situation.

Q: Are there any apps which you use as your go-to? It can be hard getting set up in a new location when you don’t know anybody.

MP: It’s funny you ask that, because the answer is yes. I actually use Bumble, Tinder, and OkCupid. Most people see those names and think ‘Dating.’ While they can definitely be used to meet that special someone, I’ve found a way to make them work for me in the business side of things.

As a matter of fact, I close clients every day by using these apps. The trick is to set up a neat, professional-looking profile which shows you to be somebody who is efficient, straightforward, and into cool things. You’d be amazed how many people are using these apps to network. And just like meeting somebody on the street, in a bar, or in a café, you never know what’s waiting for you on the other end of the connection. It’s important to be able to portray yourself as someone approachable, be that in the personal sphere or the business world. 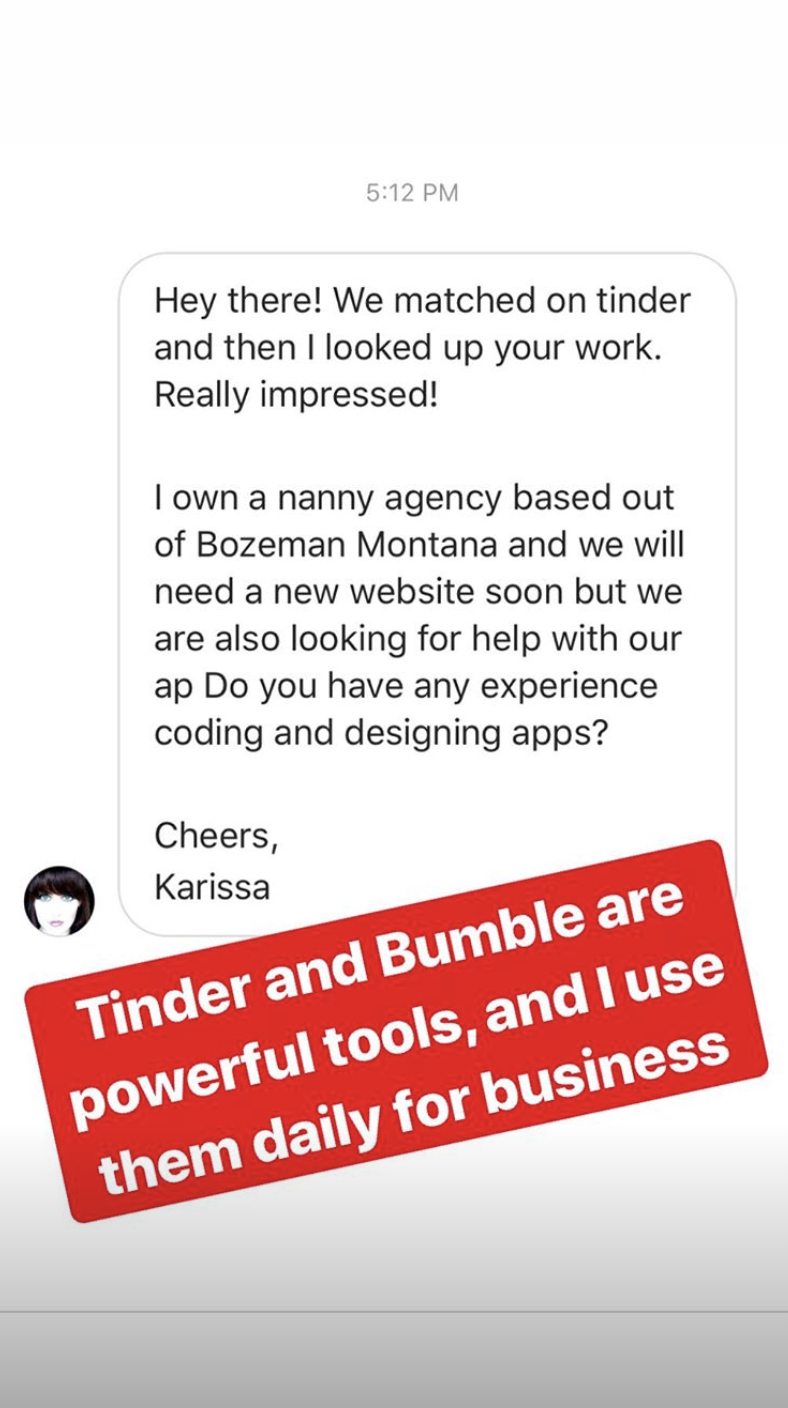 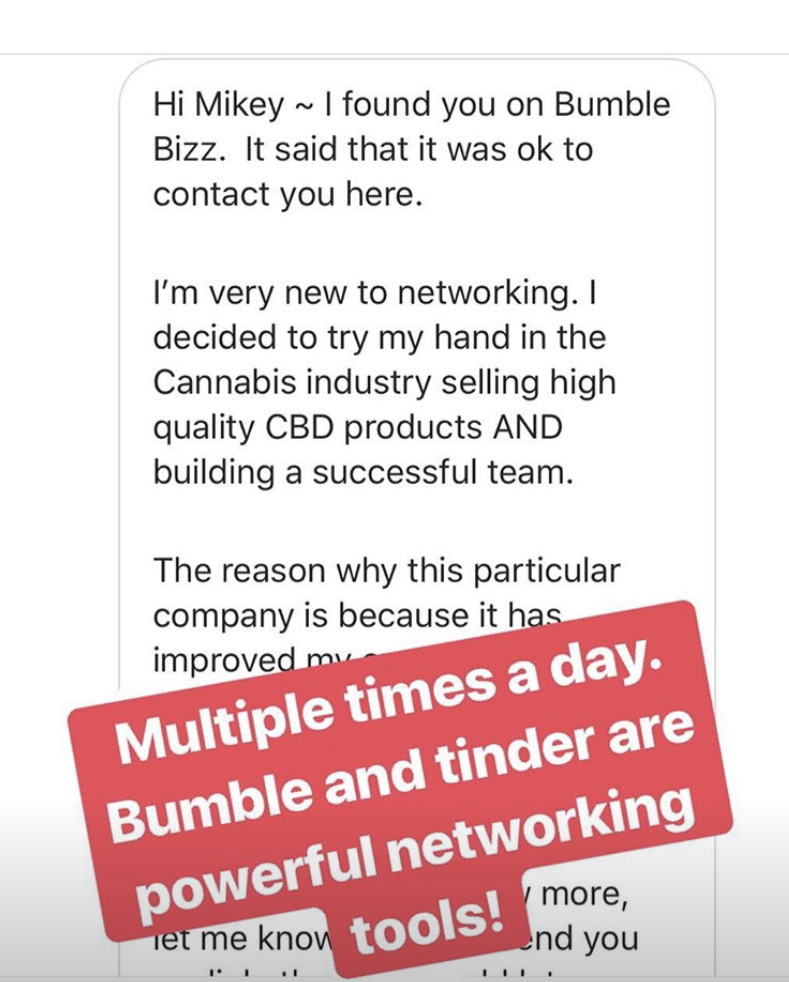 Q: Do you have any tips about the lifestyle in general? Many people want to take that plunge, but worry that they might not be prepared for what it actually requires.

MP: By far the most important thing to do is prepare yourself for a life of minimalism. Don’t be that person who drags three suitcases behind them everywhere they go. This life can be exotic, thrilling, and profitable, but you need to be able to adapt to the environment. A really great tip I got early on is to bring the essentials, and then if you need anything else, you can just buy it. It’s a slightly pricier route, but it’s well worth it considering you’ll never be weighed down by your possessions.

Too often I see people come out here, to Hawaii or to other places, without changing their mindset in any way. That’s just not going to work, and I see it—these types tend to head home after a couple weeks without much more than a couple phone numbers to show for it. There’s no need to overdo it on the minimalism, just don’t bring five pairs of shoes.

Being a travelpreneur is all about keeping things simple. It can be a really great way to reconnect with what’s important in life. Nowadays, everybody has to live at such a fast pace: we can forget that all you really need is a roof over your head, clothes on your back, and food in your stomach. Once you’ve got the essentials ticked off, you’ll find that the other aspects of your life will just sort of fall into place. It’s a really liberating feeling.

Q: Is it hard to stay focused?

MP: It can be, yeah. Especially in places like Hawaii, it can be really difficult to stay hungry. I mean, just take a look at the way Oahu looks. Everywhere you go it feels like you’re on the set of a movie. You’re going to have to learn to fight the impetus to just settle down and relax if you want to be successful, though.

A good way to fight the urge to kick back and relax is to make a habit of island-hopping. I like to book regular flights from place to place. It only costs around $60-$90, so it’s not super expensive, and sometimes a change of scenery is all it takes to re-discover that fire, that thirst. The best way I can think to sum it up is like this: for me, I was never satisfied with a day if I didn’t get some work done. Whether that was progressing towards a professional goal or just making some headway on the mental side of things, moving forward is the key. It’s just how I’m wired—it’s how so many of us who look for something ‘more,’ something outside the system, are wired. No matter how nice the views were, if I’m not moving forward, I’m not satisfied, I’m not happy.

MP: Come prepared. Before you get here, know what you want out of the location, your time, and yourself. It’s always a good idea to have a plan in life, but it’s even more important here, where there are so many potential distractions. That’s what makes Hawaii so special. There’s networking gold lying around in the streets, but you need to keep your eyes on the prize to be able to make it work for you.

Another big tip is to just be yourself. Be generous, with your time as well as with your words. Focus on the people and the business will take care of itself. Surround yourself with as many positive sources as you can—they’ll help to keep you up when you start to get tired, which is something all of us have to go through.

Q: Thanks so much, Michael! All the best on your continued adventures.

When we left him, Peres was pulling up his next meeting on his laptop and running through a few last-minute notes to prepare himself. Relaxed but clearly sharp and focused, it was plain to see that the travelpreneur was in his element. Our final glimpse of him was an ear-to-ear grin as he waved goodbye—or maybe it was just ‘Until the next time,’ because we’re sure we’ll be meeting up with him again somewhere down the line.

You can connect with Michael on Instagram (@mikeyperes), Facebook and LinkedIn. Or you can learn more about Michael at www.michaelperes.com.