Celebrated singer Otile Brown has stopped minding his business and now he is on Vera’s neck over alleged abortion.

Otile Brown has reiterated his earlier sentiments that his ex-girlfriend, vera Sidika, aborted his baby while they were still dating.

the singer was dumped earlier this year before jumping out of the borders for Ethiopian babe, Nabayet.

Otile move came a day after Vera Sidika who bleached her skin said that they will get a cute baby (Light skin) with her Tanzanian boyfriend.

Otile took to Instagram to disagree with Vera saying that she did not want to carry his baby because she did not believe that he is light skin.

Yangu ilitolewa coz she doubted I’m light skin enough for the baby to come out light skin. Yani you’d rather b with a wrong guy as long as he can get you a cute baby (light skin),” he commented on the abortion issue.

Do you think vera Sidika will give birth to a light skin baby?

Booty or Beauty? Otile Brown in Dilemma of His Exes

Embattled singer Otile Brown has expressed his swayed feelings for his ex, vera Sidika, amidst apology to recent lover.

vera Sidika celebrated her 30th birthday over the weekend and Otile Brown could not hold his calm and showered the socialite with love.

This follows a rejected apology he made to ex-lover, Nabayet, after cheating on her with a video vixen.
She addressed the issue terming it as no “joke,” and not ready to make same mistakes again.

“Dear in-laws y’all are the sweetest and I have seen your kind words and unwavering support since day one and I have no idea what I did to deserve such love. However, love is not a game, heartbreak is no joke. It’s going to take a lot more than a song to heal and rekindle,” she said.
She also revealed that her heart will always beat for Otile Brown even though they will not be together.
“My heart will always beat for him but unfortunately life has brought us here. I appreciate the effort, I really do. It takes one hell of a man to put aside pride and apologise. Maybe one day we will cross paths again. OB I am forever grateful for you. I will always be praying for your success and wishing you all the best in life🖤,” she added.
This might have been a turn off to Otile and is now trying to woo vera Sidika back.
It is also a coincidence that Nabayet will be celebrating her birthday this week, but how will it go with Otile?

After receiving backlash, Kalonzo tweeted saying that Wiper’s servers were hacked and that they meant Prezzo was to vie for Kibra seat in 2022 and not November 7 by-election.

There have been speculations around social media about who would come out next and say they are vying for the seat.

On Wednesday morning, Vera Sidika cracked up her followers after sharing a campaign poster on her Instagram.

At first, we at daily Buzz were shocked to realize that Kibra position could be taken as a joke by celebrities.

Kriss Darlin failed to get the ODM ticket even after kneeling for Baba and went ahead to be fired by NTV for joining politics and he is among the celebrities who were criticized for joking with the electorates.

Vera, however, shared the poster that was allegedly made by someone as a meme and she said “Aki who did this 😂”

Kenyan socialite, Vera Sidika, just like her color change, she has been able to switch sides on friendship with Diamond Platinumz’ baby mamas.

Vera Sidika this week made headlines after gracing Tanasha’s baby shower with half-naked attire which has stirred social media. 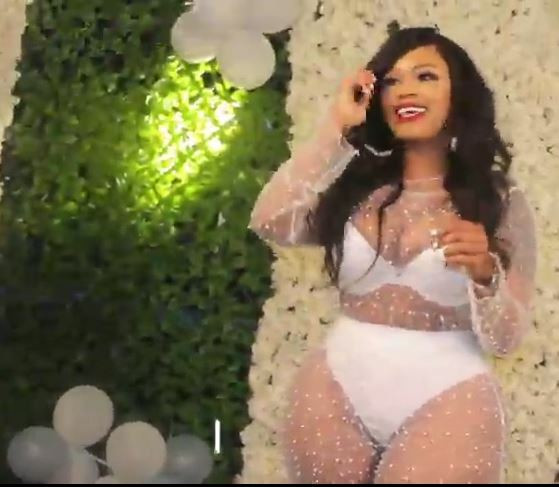 The recent happenings have proven that Vera and Zari are no longer best friends.

The East African socialites grew their friendship around 2016 where they were seen together and even vera was invited to Tiffa’s first birthday.

Tiffa Dangote is the firstborn of Diamond with Zari Hassan.

After ditching Diamond during 2018 Valentines day, Zari Hassan went down South where she has been living with Kingbae.

At the same time, Zari and Vera’s friendship died and Tanasha Donna came in. Tanasha started off by advertising Vera’s Veetox product and soon she was Diamond’s girlfriend.

Vera and Tanasha have been closed friends for some time now and they have been commenting on their Instagram posts.

Vera Sidika at a party

According to the Kenyan socialite, she revealed that she went ahead and canceled a show in the US just to attend Tanasha’s baby shower.

I was to travel to the US but after I was invited I decided to postpone. I have known Tanasha for like four-five years and she was like ‘You have to come to my baby shower’ and I had to because she’s my Kenyan sister. We support our sisters.

Some few ago, Vera was also seen partying with Tanasha at Kevin Obia’s birthday where she said they reunited after a long time.

Zari is now left with the crazy Akothee after she fell out of love with Huddah Monroe some few years back.

Vera’s skin tone has been making headlines for a week now and introducing her second bae in 2019 tops it all.

After Daily Buzz doing some research, we found that Vera’s new hunk bae is a doctor.

Tanzania’s handsome man who is a close friend to Bongo star Juma Jux is now warming Vera Sidika’s bed and they look good together.

Vera did not turn to black as we all thought, she is still artificial white as she was seen this week heading out with her yellow color to her beauty parlor in Westlands.

So, who is the mystery man?

Meet Dr. Jimmy Minja, a doctor of medicine from Tanzania who also doubles up as a musician and now calls Vera Sidika bae.

Here are some of his photos;

It is feel-good Friday and a lot of music that dropped this week is in your disposal.

What is your biggest jam that you love so far?

Here is a scoop of trending songs on the second week of July 2019.

Vera Sidika just changed her color from light skin to the deepest melanin of black. This has been trending after the sudden change to her default look.

She has dropped the song on the same advocating for love and not hate basing on one’s color.

The song is called Mimi.

The Wasafi boys are doing the most and they just dropped their Afrobongo collabo and is making waves in the streets.

The controversial Gospe-secular artiste Willy Pozze is doing the most after trending the other day when he begged Alaine to unblock him.

However, this was a stunt for their new song and it is a big tune.

Diamond’s pregnant girlfriend is working her ass off and she is coming in hard on Kenya’s music industry.

After her debut single performing well, she has released another tune blasting the haters and she is definitely winning.

Wasafi’s baddes boy, Rayvanny, is full of wonders and in his experimenting of diversity, he has released a collabo with South Africa’s songstress, Rawlene.

The song is Girlfriend which is Reggae genre.

Naiboi is currently taking over East Africa after his breakthrough song, 2 In 1.

Fast-rising female artiste Wambui Katee has dropped her second song after her debut Mahabuba which was great.

She is well known for doing covers and her first cover Suh Different by Patoranking just hit one million views on YouTube.

America’s finest Ed Sheran is winning this year and he has dropped his Album dubbed No.6 Collaborations Project.

He has featured among the biggest artist including Stormzy, Eminem, 50 Cent among others.

Having achieved her goals as a ‘white’ lady, Vera Sidika is back to black.

It is never a dull moment in Vera Sidika’s Instagram and this time around, she just stopped reggae.

Vera Sidika bleached some few years ago after making headlines on Punit’s song with her massive ‘behinds’.

Can you reverse your color after bleaching? Vera seems to had breached temporarily and it was evident through her knuckles with dark spots.

But she is not afraid of her past and the choices she made, she is now black like a berry.

View this post on Instagram
Never be defined by your past …it was just a lesson, not a life sentence. Feels good to be back!!! 💃🏿💃🏿💃🏿 Black don’t crack #backtoblack #missedmymelanin #stillbeautiful #blackbarbie
A post shared by VERA SIDIKA (@queenveebosset) on Jul 8, 2019 at 3:23am PDT