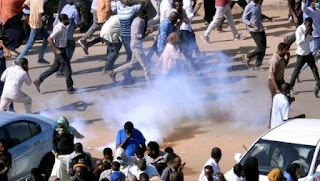 “Military dictatorship is born from the power of the gun and so it undermines the concept of the rule of Law and gives birth to a culture of might, a culture of weapons, violence and intolerance”

Protests in Sudan are still running unabated even after the fall of former President Bashir and his consequential imprisonment. The professionals led protests claim that their victory might be stolen.

Immediately after announcements were made that a military-led transitional government had been sworn in for two years with Ahmed Awad Ibn Auf and the Sudanese military chief of staff, Lt Gen Kamal Abdul Murof Al-mahi as leaders, protestors continued with their sit-in outside defence ministry compound.

During his tenure, gross Human Rights violations were reported all over the country. The most significant was the Darfur genocide. In February 2003 two fronts, the Sudan Liberation Movement (SLM) and the Justice and Equality Movement (JEM) rebel groups led fights against the government which they accused of oppressing Darfur’s non-Arab population.

The government retaliated with an ethnic cleansing campaign against non-Arabs. This resulted in deaths of hundreds of thousands and Omar Al-Bashir indictment by the International Criminal Court for genocide, war crimes and crimes against humanity.

Things could worsen for the people of Sudan if the current military-led transitional government of two years solidifies. A military that had been chosen by the former president with his cronies occupying the highest ranks.

In Thailand, Gen. Prayuth Chan-ocha runs the government as one of the world’s military dictatorships. There is no room for freedom of speech and dissent. Many are in detention for speaking against his rule. With a corrupt police force, the country has problems with innocent individuals going to jail. In one case, the police arrested one person, they did not name or remand the culprit either. Instead they took a reward of $84,000.

As I opened in my previous post, Libya is a country that has been plagued with trouble .After Gaddafi was overthrown, two forces, the General National Congress and Council of Deputies raced down to take over control of the country. The UN intervened and banned GNC. Slave trade and outright police corruption became the order of the day.

Same cases have been reported in Pakistan. A country with almost no form of government. Although former Pakistan dictator Prevez Musharraf disagreed, indicating that civilian governments are often a problem to Asian countries, Pakistan becomes quite aggressive towards other countries whenever a coup (which are several) is experienced.

Many other countries including Myammar where oppression against it’s citizens is rampant do exist. For example, three Muslims were arrested for praying in the street. They did this after the government shut down their places of worship.

Democracy is often a problem in military dictatorships.

The state-run media had initially warned that citizens should stick to rules that had been set by the already functioning government. Things might worsen if the military decide to act otherwise to disperse the crowds. However, pressure is mounting from outside the AU included that a civilian government should be sought after for it is  what the protesters have been camping for. The AU had issued a 15 days ultimatum for transfer of the government or the country risk being expelled from the bloc.

Omar Al-Bashir won’t be extradited to the ICC to face charges against humanity. This will be a decision to be made by the country’s still to be formed government.