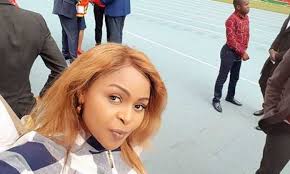 The 28th of November saw the country exercise the inauguration of Uhuru Kenyatta for the second term. Top artistes were in attendance. Rufftone, Size 8 and Emmy Kosgei entertained Kenyans during the ceremony.

Everything seemed so fine until Size 8 stepped on stage. Performance was a golden opportunity because the event was a rare occasion. But for every righteous person who is invited to represent the church in any forum, they tend to preach first before getting to the point. This was no difference with Size 8. 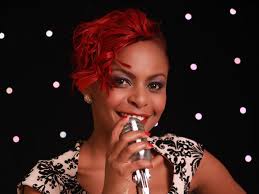 We can understand that it was a Christian path but then wrong choice of songs in an event. Then TAMTAM TAM came through. I guess the UHURUTO were having their TAMTAMTAM moment in their re-election to office.

Kenyans never forgive. they always give their opinions;

Eva Mbugua: You got me bored aki!
Lorna Mwende: Why did they cut you short.
Sharon: She was talking too much and the music was not for the occasion
Mugablue: You need to up your live performance game. Sometimes u come out as irritating.
Lydia: Things u should stop doing for the love of camera.
Taurus: Size 8, your voice was so off guard according to the music that was playing. True the devil is a liar! Thirst and Greed for money! #resist
Gladys Wambugu: You were beautiful, but next time talk less and choose a song in accordance with occasion…. And stop yelling to your audience… #peace
Juan: @Wafulamelvin97 my problem was the choice of song, in a presidential inauguration, ‘unataka mke mwema’!! Cheiiiii…..
Muriithi: Hiyo mdomo wachanga kwa nyumba
Roz.gee: Second presentation #Tamtam to me wasn’t a good choice for today’s event….. But najua lazima ungerudi stage ndo uzunguke uwanja kama Emmy Kosgei
Racheal: Next time kipewa mic punguza pang’ang’a and go straight performing
Koey: Woi hadi akakatizwa nilimhurumia Hyo aibu yote…. Ati Sasa DJ tupatie watu wengine nafasi
Svaslyda: Good but you were shouting not singing
Kathuremuia:  Actually that “kujienjoy really pissed me off ,before she could even sing a word the Mc cut her off,
Ivy: Today you were shouting not singing. Not what was expected of you mama
Mukuiya: As much as I try to be positive but you really need coaching in performance and not shouting over yourself. Had to change channels
Nthambiirene: Punguza panganga and I really doubt you mama sasa!!!!!!okoka cha ukweli uwache movie
Fayt: Today was your worst. I think you are doing too much mama Wambo.Taking too much jobs,mara you are hosting some show,mara ni pampers.At the end of the day your music suffers.I dont think you rehersed well for todays show which was a NATIONAL event.Remember to the public you are an entertainer and that’s the reason we loved you in the first place
Kathuremuia: I love your music, kudos, but next time you are given such a chance, kindly go straight to singing don’t hype the crowd. Today you hyped too much.
Tweet
Share
Pin
Share
0 Shares
0
FacebookTwitterPinterestWhatsappEmail