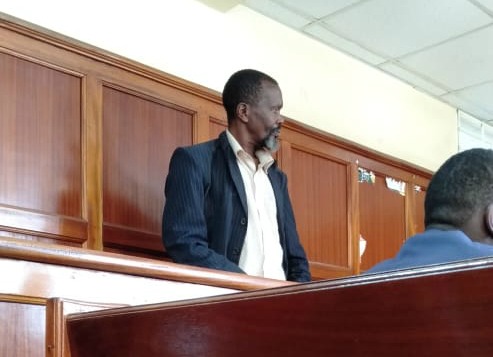 A shoe shiner on Monday shocked a court after he said that President Uhuru Kenyatta will die in eight days, The Star reports.
Wilson Mwangi Macharia who looked composed stood in the dock told magistrate Z Abdul that he is sure of the President’s death as he was told by the ‘holy spirit’.
“I am not on medication the holy spirit spoke to me,” said Macharia.
The prosecution was forced to ask the court to allow them to conduct further medical tests on Macharia.

He was taken to parliament police station and later to Central police.
The man who has been suffering epilepsy since childhood is a father of five.
He stopped taking his medication in 1986 and continues to get seizures every so often.
According to court records, Macharia was arrested last month after he was seen with a placard bearing inscriptions: “Uhuru will die if he fails to call god through us before March 19, 2019.”
Kenyans are waiting eight days to March 19 to see if the ‘prophet’ is real or just like other bunch of liars and gospel gymnasts.
Tweet
Share
Pin
Share
0 Shares
0
FacebookTwitterPinterestWhatsappEmail