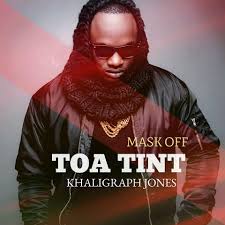 Kenyan ill est rapper Khaligraph Jones has taken the Kenyan media by a surprise. His new publicity stunt has made some of his fans ‘crucify’ him, Now khaligraph looks like an American rapper? yes he is a light skin in that matter. He is the first hip-hop artist to bleach his skin in the history of Kenya, perhaps he is making a legacy. Some said that no Negro hates on his color, but who is Papa Jones? he is a man of his principles.
He got a new song called Toa tint {Mask Off] which is now the talk of town and his fans seems to take the song positively. Every open opportunity gives chances for beefs, The healing wound between Khaligraph and Octopizzo is getting fresh, in the song Toa tint,he seemed to have mentioned Octopizzo in his verse which Octo did not take it a joke, His response in social was intense.